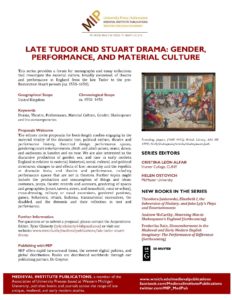 Helen Ostovich and I co-edit a series, “Late Tudor and Stuart Drama:  Gender, Performance, and Material Culture,” for Medieval Institute Publications.  This series provides a forum for monographs and essay collections that investigate the material culture, broadly conceived, of theatre and performance in England from the late Tudor to the pre-Restoration Stuart periods (c. 1550–1650).

For questions or to submit a proposal, please contact the Acquisitions Editor, Tyler Cloherty (tylercloherty44@gmail.com), or visit our website: www.wmich.edu/medievalpublications/late-tudor-stuart-drama

Books in the series: 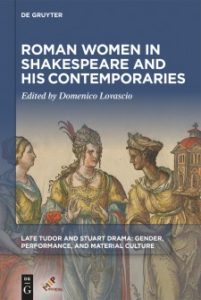 Roman Women in Shakespeare and His Contemporaries

This volume explores with an unprecedented thoroughness and variety of perspectives the diverse issues connected to female identities in the early modern English plays set in ancient Rome. Roman Women in Shakespeare and His Contemporaries puts Shakespeare’s Roman world in dialogue with a number of Roman plays by writers as diverse as Matthew Gwinne, Ben Jonson, John Fletcher, Philip Massinger, Thomas May, and Nathanael Richards. Thus, the collection seeks to challenge conventional wisdom about the plays under scrutiny by specifically focusing on their female rather than male characters, as well as sharpening our awareness of the fact that the Roman world on the early modern stage cannot be straightforwardly and simplistically equated with Shakespeare’s 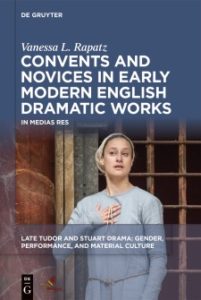 This study examines how the English came to terms with the meanings of convents and novices even after they disappeared from the physical and social landscape. In five chapters, it traces convents and novices across a range of dramatic texts by such writers as William Shakespeare, Christopher Marlowe, Margaret Cavendish, and Aphra Behn. Convents, novices, and problem plays emerge as parallel sites of ambiguity that reflect the social, political, and religious uncertainties England faced after the Reformation. 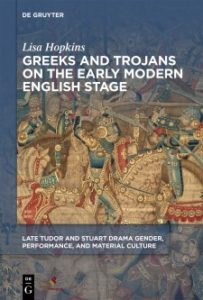 Greeks and Trojans on the Early Modern English Stage

The Trojan prince Aeneas was supposedly the ancestor of the Tudors; given the English connection, no story was more interesting to Shakespeare and his contemporaries than that of Troy. This book explores the wide range of allusions to Greece and Troy in plays by Shakespeare, Marlowe, Chettle, Ford and Beaumont and Fletcher, looking not only at plays actually set in Greece or Troy but also those which draw on characters and motifs from Greek mythology and the Trojan War. 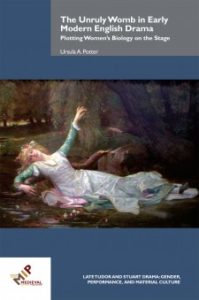 By Ursula A. Potter

This study provides an accessible, informative and entertaining introduction to women’s sexual health as presented on the early modern stage, and how dramatists coded for it. Beginning with the rise of green sickness (the disease of virgins) from its earliest reference in drama in the 1560s, Ursula Potter traces a continuing fascination with the womb by dramatists through to the oxymoron of the chaste sex debate in the 1640s. She illuminates how playwrights both satirized and perpetuated the notion of the womb’s insatiable appetite. 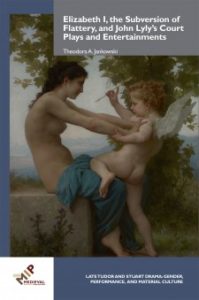 Elizabeth I, the Subversion of Flattery, and John Lyly’s Plays and Entertainments

By Theodora A. Jankowski

Theodora Jankowski looks at both the light and the dark side of the Elizabeth character in each of John Lyly’s court plays, while at the same time considering how that allegory works in terms of the various issues Lyly debates within the plays. She demonstrates how Lyly, while praising the queen and accepting her beneficence, simultaneously manages to present his audiences with the “dark queen,” the opposite side of the positive image of the Queen of England.

Society for the Study of Women in the Renaissance, NYC

This site is part of Humanities Commons. Explore other sites on this network or register to build your own.
Terms of ServicePrivacy PolicyGuidelines for Participation
Skip to toolbar